Dorrance Publishing recently celebrated its 102nd anniversary! While 102 years is a long time, it is no match for books themselves. When did book printing start, and how did it become what it is today? Let’s dive into history! 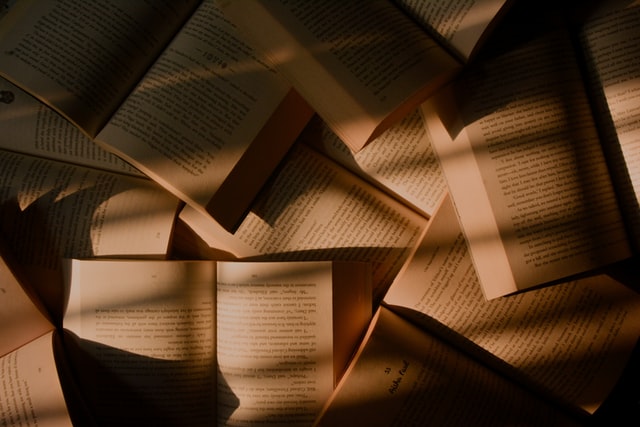 It is commonly known that German inventor Johannes Gutenberg invented the printing press around 1440. However, printing was actually first invented in China. Early printed books existed in China in the 800s. A Buddhist book from around 868 A.D. called The Diamond Sutra is said to be the oldest known printed book.

The method of printing used was pressing hand-carved blocks of wood into paper. Only the wealthiest of society could afford printed books vs handwritten ones. These methods of printing continued in China in the following centuries, with clay soon becoming the preferred method, as ink did not soak into it as much as wood. By the 1200s, books were more common in China.

In the 1400s, Gutenberg’s printing press used metal rather than wood, and letters were movable in order to create new layouts and pages easily. Not only did Gutenberg develop the metal press technology, he also created an ink that would adhere to metal well, as well as making the metal casts themselves!

Gutenberg didn’t suddenly start printing books for the people. The first materials printed were calendars, schedules, and other random texts. The first book Gutenberg printed was the Bible. The only other book thought to have been printed by Gutenberg was a Latin dictionary.

Books were printed in large volumes when the printing press made its way to Italy. Cities such as Rome and Venice had hundreds of presses by 1500. The Catholic Church produced countless texts for its own purposes, while books outside of religion that fit in with the early humanist (nonreligious) movement were also produced. At this time, printing presses became more formal operations, with full time typographers working to establish the best fonts for printing and graphic markers being developed to distinguish the work of one press from another.

By the end of the 1500s, France took the lead in book production and perfection of printing industry standards. Inexpensive, “pocket” editions of books were popular, as well as large standard books. Subject matter related to the Catholic Church was popular, and Protestant and non-Christian texts rose in popularity due to the ease of production.

In England around this time, books of these subjects were printed, along with fiction titles such as King Arthur and The Canterbury Tales.

The technology of the European printing press remained relatively the same for the next couple hundreds of years – the huge presses required specialized operators and could print 250 sheets of paper an hour. 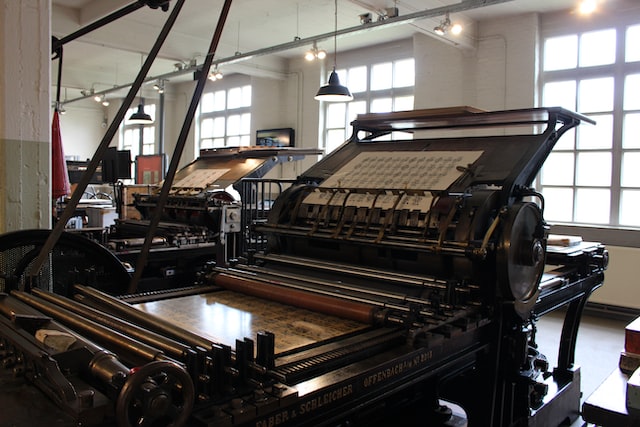 In the 19th century, costs associated with book printing went dramatically down as technology advanced. Bookselling and the book trade were huge, viable, global industries.

Up to this point in the 1800s, there was not strong copyright law as we know it today. American printers would print their own versions of books from across the ocean and sell them. Soon, copyright laws would be invented as well as other regulations in publishing to keep prices down and all parties involved in publishing satisfied.

Royalties for authors’ works via publishers reached new heights. The first literary agents appeared in 1875 in Britain and the practice soon spread across the ocean. Booksellers in the traditional store settings thrived. New selling methods such as advanced subscriptions, door-to-door sales, and mail ordering became commonplace.

Post World War I, at the beginning of the 20th century, economic trends boosted the United States’ publishing industries. New York was seen as a hub for publishing while Europe experienced a down-turn due to the post-World War I economy. The Great Depression in the United States would swing the pendulum the other way, as American publishing had a downturn with the hardships economically caused by the Depression.

In 1935 the first major paperback book operation by Penguin was launched, and it was successful immediately. Readers enjoyed the simple typography and cover designs. Typography and design for printed books was as lucrative as it ever was, as each printer wanted to look nicer than the competition.

The technology associated with the printing press was largely unchanged until offset printing. Offset printing, in which the inked image is transferred from a plate to a rubber blanket and then to the printing surface, proved itself ideal for mass production levels of books and other materials. In the post-World War II era, specialized publishing houses for genres flourished along with new technologies to bring mass production of books like never before.

The paperback book, which is so common today, only became popular in the 1950s. In the modern era, publishers do not print their books directly but typically send them to large companies that specialize in printing. Publishers, meanwhile, focus on the editorial side of things – who gets published and when.

Dorrance began in 1920 – before paperback books were even published, and before the advent of mass production, offset printing, and digital technologies. Books have stood the test of time since the first printing centuries ago, and it’s safe to say that they will continue into the future. While eBooks are popular, printed books are still the preferred choice of readers.

With Dorrance, you can count on the highest quality final printed books, cementing your story within the long and fascinating history of books!