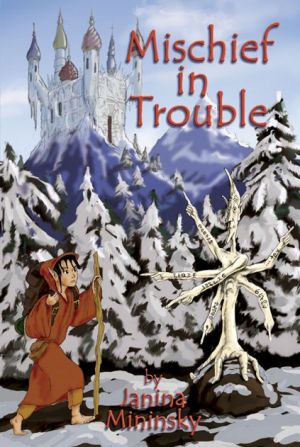 It may be hard to believe, but Christmas is only two days away! Because we’re in the midst of the holiday season, we at Dorrance Publishing wanted to give you a great novel to enjoy while curled up next to the fireside – or better yet, you can buy this novel as an e-book for any last minute Christmas gifts!

Although our Dorrance Bookstore is filled with lots of great books to choose from, today we decided to shine the spotlight on one in particular: Janina Mininsky’s Mischief in Trouble.

Though peeking at your presents before Christmas morning is frowned upon, with a title as intriguing as this Dorrance book, we can’t help but give you a quick look!

But, shhh … don’t tell anyone!

No matter how hard he tries, trouble always follows Mischief, a small elf who attracts trouble like a magnet. As Christmas is fast approaching in the Elf Lands, the excitement is contagious as everyone is excited and busy getting ready for Santa’s big visit.

As the story will have it, wherever Mischief goes, trouble is not far behind – Christmas trees lose their decorations, musical instruments refuse to play and even the furniture in Elf Lands doesn’t cooperate!

The tipping point of trouble for Mischief happens after an unfortunate mishap that involves the Queen’s magical wand and King’s crown.

It’s this incident that lands Mischief a one-way ticket out of the Elf Lands, he is exiled into a world beyond the reaches of what was once his home. As Mischief navigates his way through this unfamiliar land, he’ll meet humans and monsters as he experiences many great adventures during his journey.

But, readers can’t help but wonder, “Will Mischief ever make it home?”

If you can’t wait to learn how this story unfolds, you can order Mischief in Trouble, today!

From everyone at Dorrance Publishing, we’d like to wish you and your family Happy Holidays!